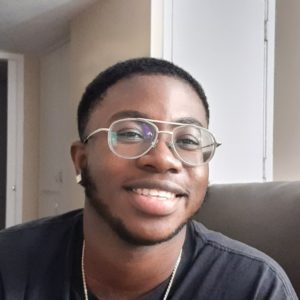 Andrew Marshall (he/him) of Georgia was selected for a Founders’ grant for gender affirming surgery with Dr. Nour Abboushi. When asked about the meaningfulness of receiving a grant from the Jim Collins Foundation, Andrew stated, “If I could sum up this whole process in one word, I’d use ‘hope.’ I spent years researching for relief, battling insurance, and praying that something would come through so I could live life as the man I’ve envisioned. As a college student fighting to escape poverty, I steered away from help for quite a while. There was a lot of shame and guilt surrounding the idea of even asking. Because of this and many failed attempts at self-funding surgery, I feared my medical transition would be at a stand-still indefinitely. That was until I got the call that I’d been chosen to receive this grant. In just seconds, my hope toward the future was restored. I finally saw positive outlooks on my future again. One where I’ll be living in my absolute truth and a body in which I feel like me. One of comfortability and acceptance. One where I can shift my focus away from body dysphoria and instead toward mentoring and making an impact on the lives of BIPOC, impoverished, and LGBTQ+ kids like me through music and spiritual healing.”